The entire cryptocurrency market had a great week gaining close to $30 billion in market capitalization. Bitcoin and other major coins suffered a slig

BTT is up 8% in the past 10 hours after a significant price spike.BCH has been slowly climbing up, outperforming many cryptocurrencies in the past few weeks.WAVES saw a massive 13% price explosion in the past six hours.

The entire cryptocurrency market had a great week gaining close to $30 billion in market capitalization. Bitcoin and other major coins suffered a slight pullback; however, not all coins had a correction, here are the three top gainers of the past 24 hours.

BitTorrent planning to continue with its uptrend

BTT managed to establish a daily uptrend after setting several higher lows and higher highs. The digital asset gained around $40 million in market capitalization in the past week, and it’s now aiming to hit the last daily high at $0.0003 with the help of the uptrend. 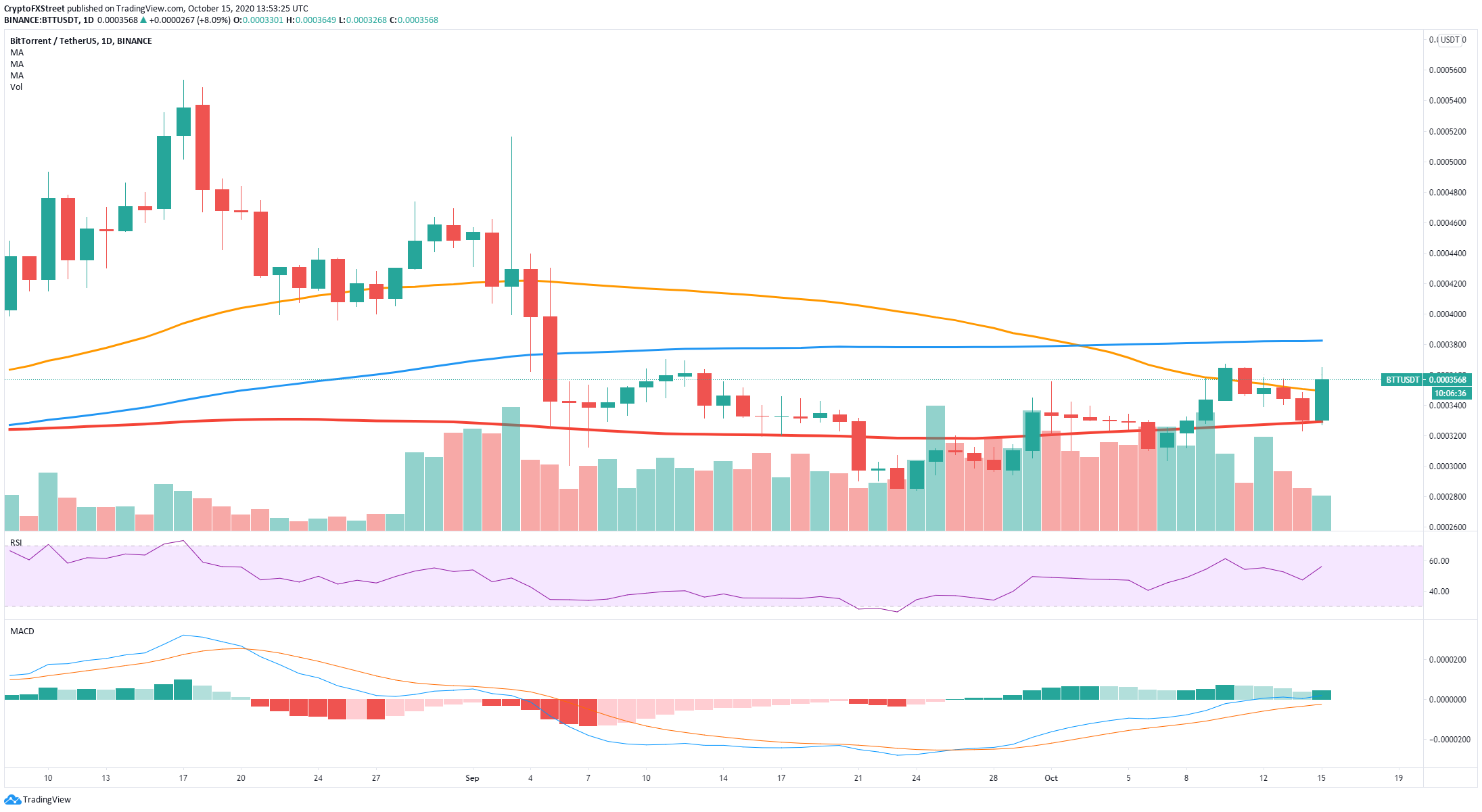 On the daily chart, the bulls have managed to defend a critical support level at $0.00033 in the form of the 200-SMA. The price is currently above the 50-SMA, which bulls are looking to turn into a support level after the close of today’s candlestick.

The MACD has remained bullish since September 26, and trading volume has increased a lot since the beginning of September. The next potential price target for bulls would be $0.00038, where the 100-SMA is currently located. The RSI is not overextended and will not stop the price for now. 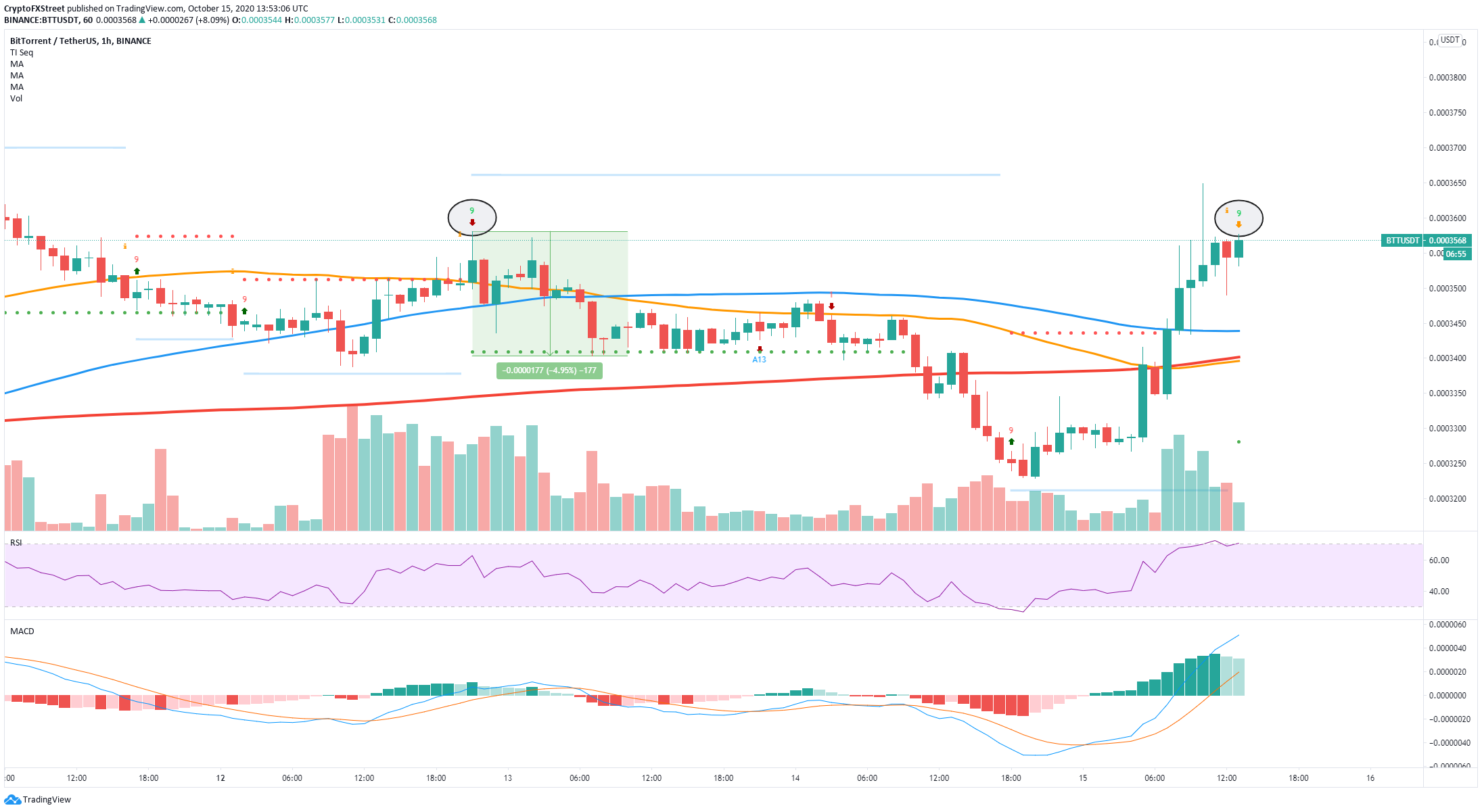 On the other hand, the 1-hour chart is showing bearish signs. The TD sequential indicator has just presented a sell signal. The trading volume is declining despite the past surge, usually an indication that bulls are weak. The last sell signal had a lot of follow-throughs, dropping the price of BTT by 5% within the next 15 hours.

BCH has been trading inside a 4-hour uptrend at a slow but steady pace. The price has established several higher lows at $233, $237, $250, and $257 currently and many higher highs. The uptrend is robust, and bulls are looking for more. 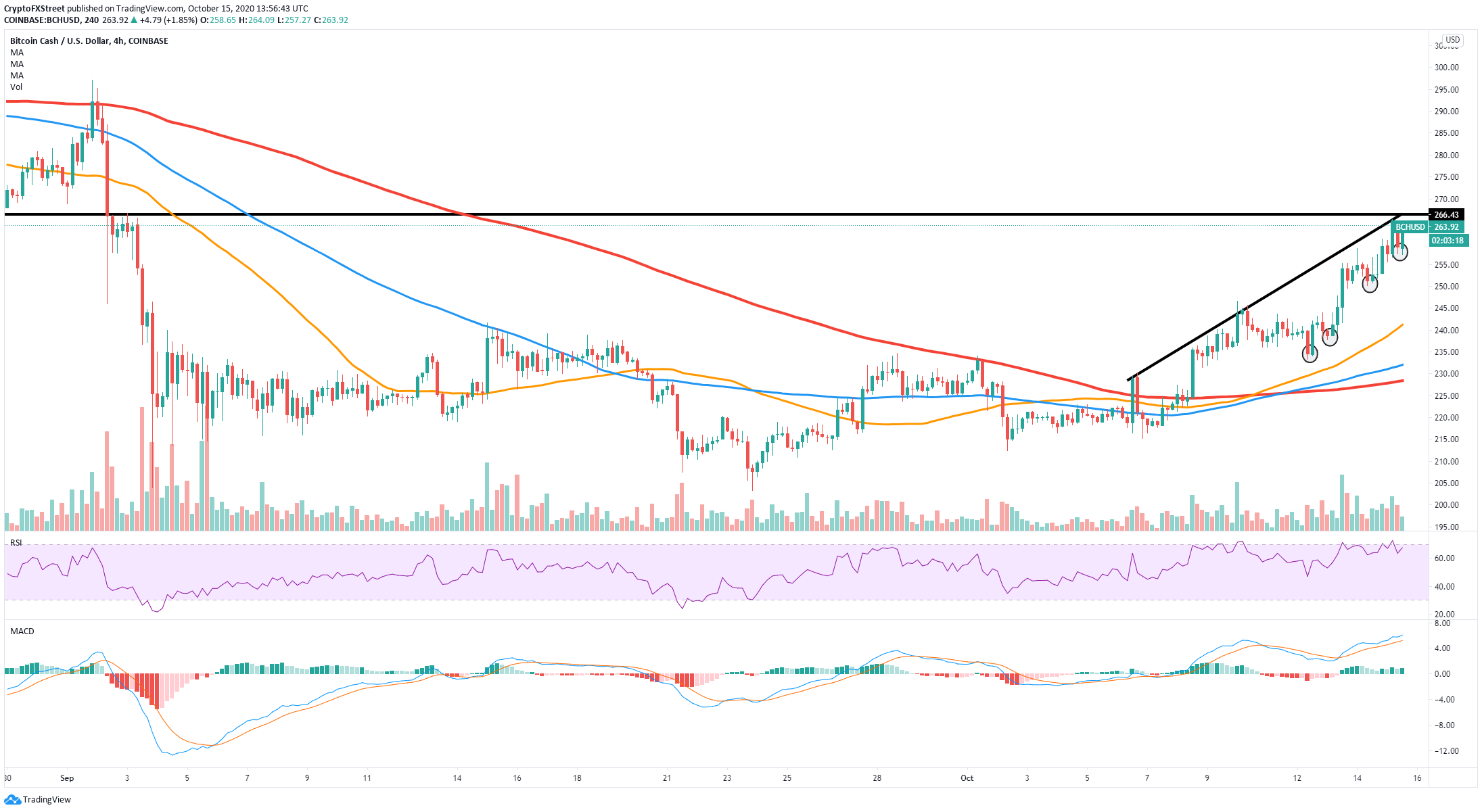 The MACD turned bullish on October 13, and it’s not showing signs of weakness just yet. Although it has been extended for some time, the RSI didn’t stop the bulls from pushing BCH higher. The next target price is located at $266, a high established on September 3.

The IOMAP chart actually shows that the strongest resistance area is located between $296 and $306, with close to 1 million BCH in volume. This means that a breakout above $266 can easily push BCH towards $298 and $306 in the longer-term. 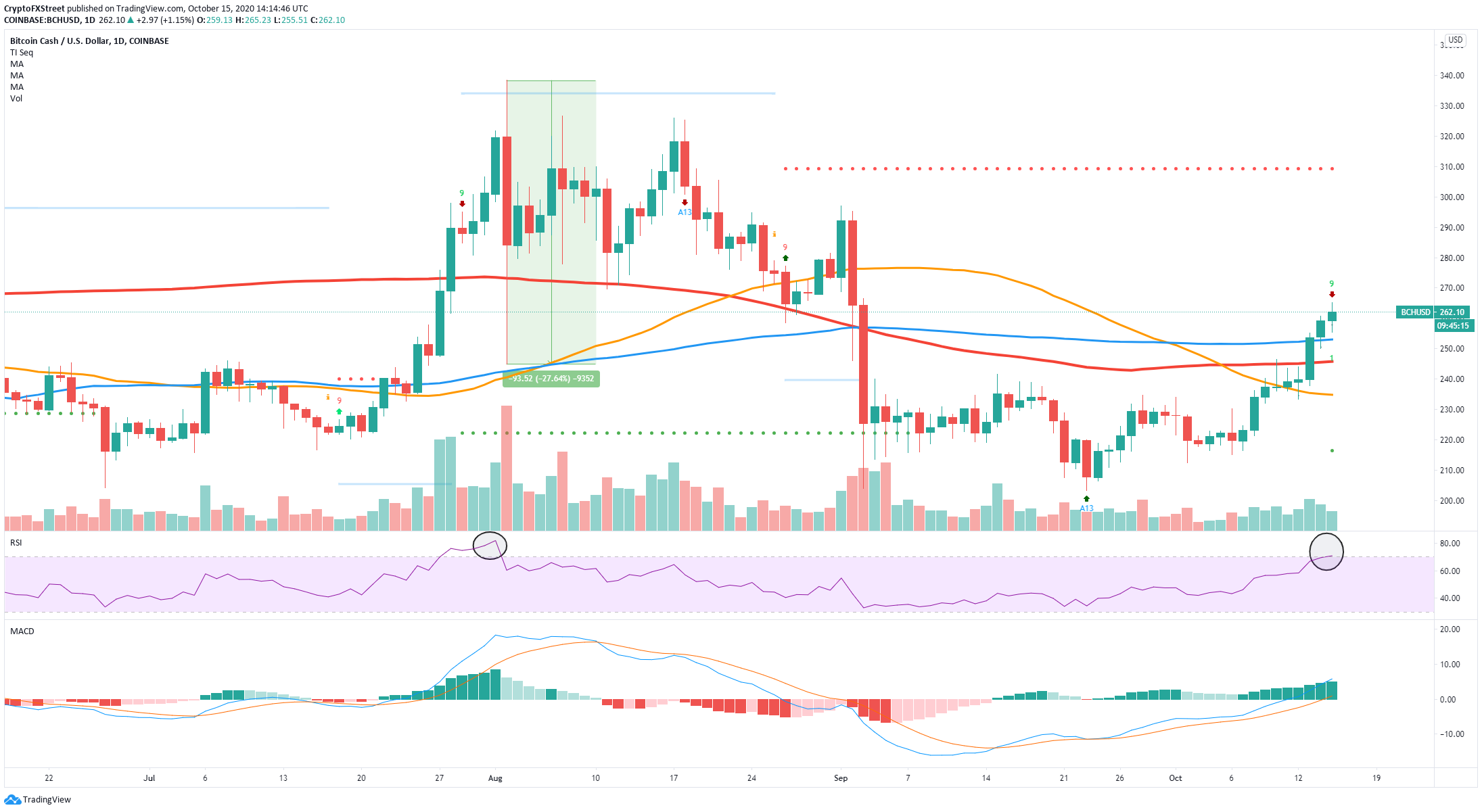 On the daily chart, the TD sequential indicator has presented a sell signal, and the RSI is overextended for the first time since July 2020. The last time the RSI was overbought, the price of BCH eventually had a major 27% crash.

Selling pressure seems to be increasing for BCH as the ‘Bulls and Bears’ chart shows the bears are in control with a volume of 1.43 million coins in the past seven days as opposed to only 1.34 million for the bulls. At the very least, the digital asset could fall towards $253, where the 100-SMA is currently located on the daily chart.

WAVES waiting for a decisive breakout

WAVES had a major price spike in the past 24 hours, climbing from a low of $2.43 to a high of $2.7. In the past week, the digital asset has gained around $40 million in market capitalization, positioning itself as the 56th largest cryptocurrency in the market. 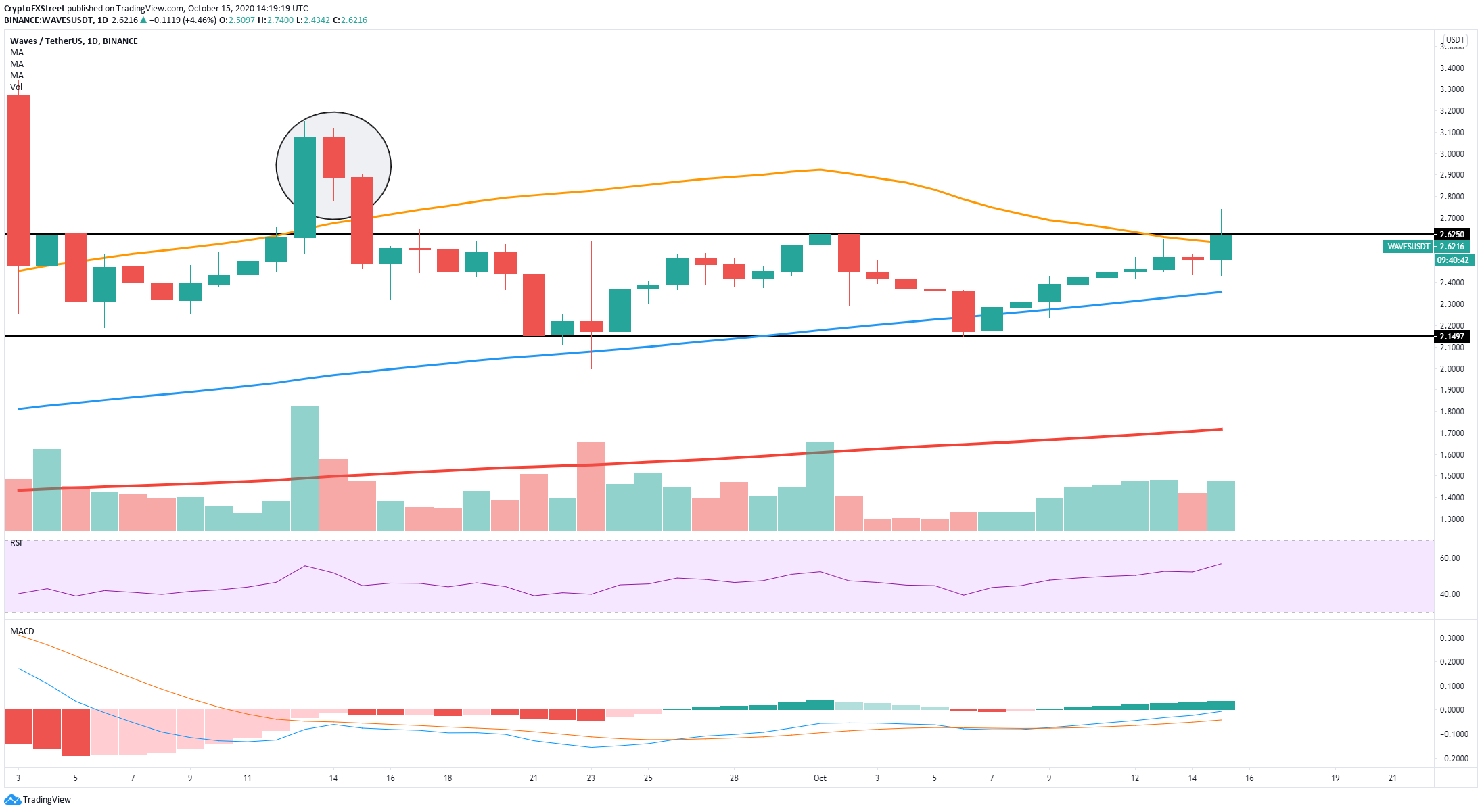 WAVES is trading inside a tight range on the daily chart that only had a crack on September 13. The most significant resistance level is $2.62, a level that has been tested several times in the past month. It also basically coincides with the 100-SMA on the daily chart.

A breakout above both levels would most likely push WAVES up to $3.14, which is the high of September 13 during the first breakout. The MACD turned bullish on October 8, and it’s gaining a lot of strength; meanwhile, the RSI is not overextended yet. 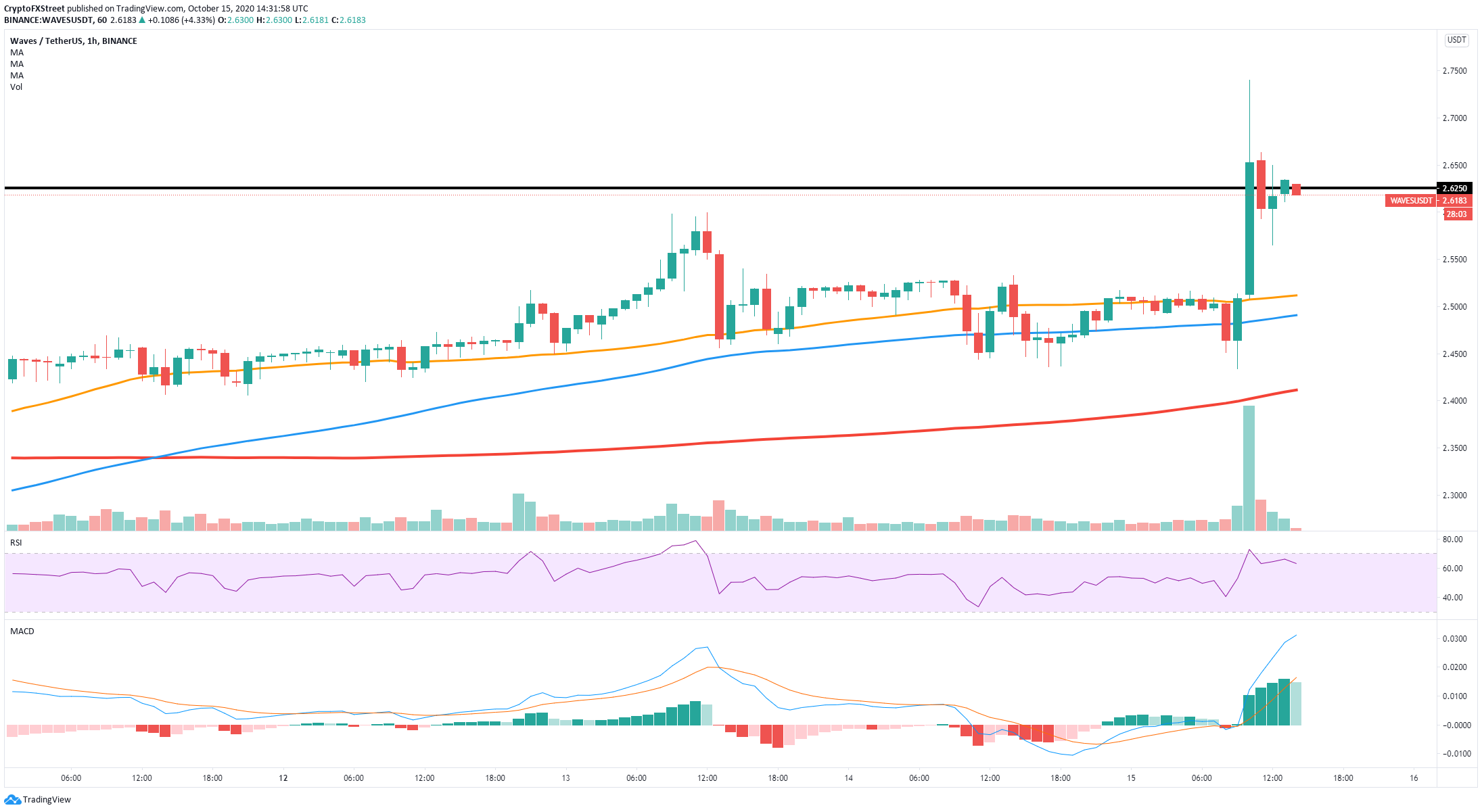 It’s important to note that WAVES already attempted to breakout above the crucial $2.62 resistance level and got rejected again. The rejection hasn’t been too strong, but it’s still a bearish sign in the short-term. The RSI is close to overextension on the hourly chart, which makes it difficult for the bulls to see a definitive breakout above $2.62.

Another rejection from the resistance level could push WAVES down to $2.5, where both the 100-SMA and the 50-SMA are located. The huge spike in trading volume on the breakout had no continuation, another bearish sign. The lowest target price for bears would be $2.4, the 200-SMA.

BTT bulls are looking at the next potential price target at $0.00038, where the 100-SMA is currently located on the daily chart. A bullish breakout for BCH above $266 can quickly push BCH towards $298 and $306 in the longer-term. WAVES bulls need to pay close attention to $2.62. A breakout can drive the price towards $3.14.

Also check out this articles:

The Bitcoin dominance chart shows an optimal set-up for back at the to...

Guild leadership touts that the new agreement, valued at $200 million ...

The couple tied the knot five years ago and share one daughter togethe...

The Atlanta-based mogul opens up about how he was able to complete the...

The contemporary adaptation of the beloved book by Anna Sewell will de...